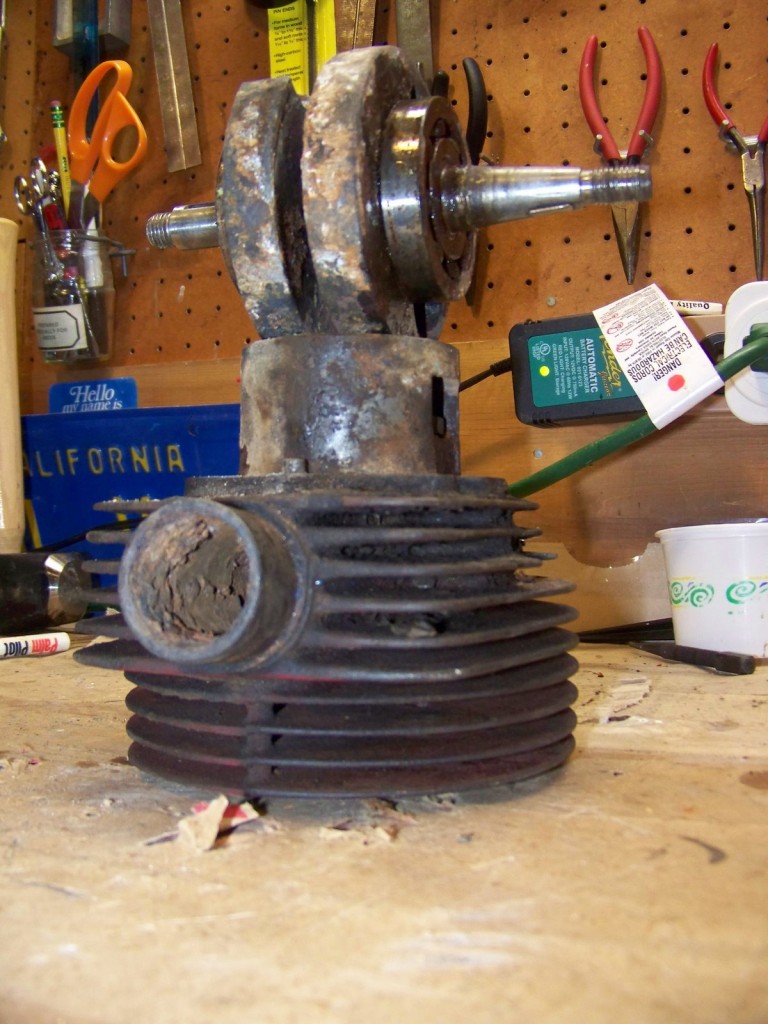 Rebuilding the Engine, and Discovering Cracks

Well, dismantling would be a better word I guess. After rebuilding the carburetor (and breaking it, sniff) I moved on to the engine. Following the Haynes manual, I removed the variator -- the wires were rather ratty. And then the clutch. Took a day to dismantle the clutch -- it was TOTALLY rusted out! Not repairable -- all the plates were totally rusted, half the bell was rusted, and half of the 45-degree gear was as well.

Fortunately I found a used clutch for not too much, from a guy on ScooterBBS, and when it arrived it was in perfect condition -- didn't even need new plates. Glad I didn't waste time trying to fix the old one...

Then on to removing the cylinder head. I removed the bolts, but the cylinder would NOT budge -- couldn't remove it. So then I decided to split the case halves and see what was going on. 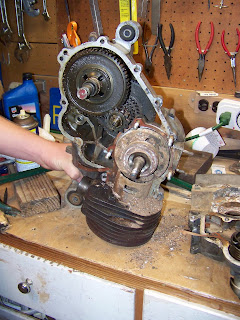 Oy! I worked for over a week trying to gently split it so as not to damage the surfaces where the gasket goes. No luck. Tried heating the bearing with a blow torch, tapping on the little tab that the manual says it's okay to tap on, etc. Nothing. Then I notice, while examing the case, a 2-inch long crack in the case, right by the main bearing. Shoot. Fortunately I also found a used case from that same guy on ScooterBBS -- and when it arrived it seemed in pretty good shape. It's from a 62 VBB2T,so it's not exactly the same, but I think it's close enough. (Main difference I saw was how the break shoes mount on -- there are two posts instead of just one like on the VBB1T. So it will require different breaks, no biggie).

So not having to worry about damaging the old case, my son and I started hammering away at the old one to split it and see why it was so wedged. We worked for a couple weeks at it. Finally my son was able to drive a few big screwdrivers and a cold-chisel between the halves, and it popped apart. And then we understood... 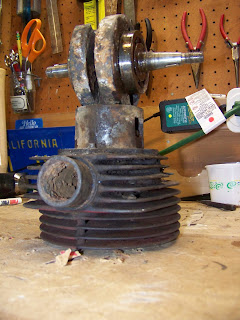 This thing must have had a pool of water inside of it for 20 years. The entire top end was one solid rusted piece of metal. Piston, cylinder, bearings, flywheel. One piece now! I'll post a picture below, it really is pretty impressive. SO now I needed to add a new top end and flywheel to the list of parts to get.

Lesson number three: Next time you buy a scooter to rebuild, make sure the engine/kickstart at least turns!

Oh well, I wanted a "learning experience"! Plus I feel somewhat virtuous resurrecting a truely dead scooter. Yeah, that's it, keep telling yourself that!

But all was not lost. Turns out that the transmission section had maintained its seal, and all the gears are in excellent shape. Even the bearings there look good. So I just need a new cruciform and that part at least is reusable.

So I already mentioned that I got a good-condition used clutch and case. I shopped around for a few months trying to find a VBB1T "deflector head" piston and cylinder. None available used. None available new either. But I did find a new dome-headed piston. I talked to a few people and they all claimed that I could use it and not have to change the timing. Hmm, we'll see about that, but I got it anyway. And a new cylinder head to go with it, since I wouldn't be able to use the one from the deflector head.

If any expert out there knows whether or not I need to worry about adapting the timing because of using a dome-headed piston instead of the deflector-head, please let me know!

So I have all the pieces to reassemble the engine. However, I relized that I'll need to get the gas tank refurbished first, and either mount the engine somewhere or else put it back onto the body, in order to try it out. Which means I need to decide if I'll put it all back together first, try it out, then disassemble again to do the body work and painting. Or if I should do the body work and painting next, and just put it together once. I decided to redo the front end next, which I would have to do in either case, and defer that decision until I saw how much work the body was going to be.

Then I'll finally be caught up with where I am now -- just in time for my son to get home from college and help me make more progress on the rebuilding.